Spotted over on the SubGenius Wikia Clench. 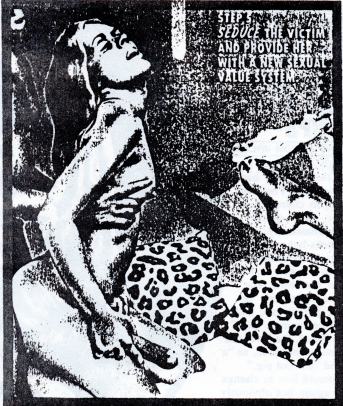 The spring 1977 issue of Conspiracy Digest featured an interview with Robert Anton Wilson (RAW) in which he discussed the full spectrum of where his head was at during the period.

In response, Mae Brussell—the Matron Saint of Conspiracy Theorists—fired off the following letter challenging RAW’s contention that Tim Leary’s stint in prison was anything but difficult, and in actuality (or at least in Mae’s reality tunnel) Leary had been coddled by the Feds (and fed steak!) and that his time in lock-up was actually a cake-walk.

Mae further employed the cake metaphor to explain how the likes of Leary, RAW and John Lilly were in cahoots with the CIA to corrupt the youth of America!

White sugar is a drug in cake icing used to induce us to consume white flour. Sugar is, literally, a reward for eating the cake. Lilly, [Bucky] Fuller, Wilson, and Leary are the white sugar frosting that sweeps people into happy time, scooping them up into a dream world so they will avoid the reality of a good diet of sound action. Leary, Wilson and their likes are used by the CIA Intelligence Community to sugar sweet the yellow brick road to Oz, while the means to enslave mankind are being manufactured under our noses…

In response to Mae’s missive, RAW came clean about his role in this diabolical brainwashing plot, confessing that he’d been a “high Official of the Central Intelligence Agency since July 23, 1973” and, further agreeing with Mae’s theory on the “white sugar” allegations, agreed that:

Dr. Leary didn’t merely have a high time at that great pleasure resort, Folsom Prison, as Mae has discovered; he had a great time in all the 29 prisons he visited during the last six years, although actually most of the time he was living (with a private harem) in the Taj Mahal, only appearing at the prisons often enough to keep alive the myth that he was a political prisoner…

One might conclude that Mae’s theory re: RAW and Leary as dastardly members of this “white sugar mafia” was, in essence, a metaphor to suggest that they’d been used by intelligence agency handlers to soft peddle psychedelics and space migration and all the other heady stuff they were entertaining at the time.

In this vein, I remember hearing one of Mae’s tape recorded radio shows (from the early 1980s) where she claimed that Leary, RAW and other unnamed “spychiatrists” were part of a mind control squadron that went around brainwashing important people. For instance, Mae claimed that this Leary-RAW MK-ULTRA tag team showed up at Larry Flynt’s mansion (during the period that Flynt was attempting to expose the Kennedy assassination) and effectively messed with Flynt’s mind and influenced him to drop his one million dollar reward to expose the assassination. Afterwards, Flynt became increasingly erratic, like showing up for his trial dressed only in a diaper made out of an American flag, and a number of other publicity stunts that gave the impression he’d gone off his nut.

(If anyone has a copy or knows which episode from the Worldwatchers Archive of this specific Mae Brussell tape please contact your humble chronicler here at HD hindquarters so I know I just didn’t imagine hearing it.)

Given these peculiar insights, one wonders if Mae, at some point, hadn’t been exposed to the rantings of Kerry Thornley, as it was during this period (late-70s/early-80s) that Kerry’s schizophrenia kicked into high gear and he was making similar claims that both RAW and Leary were working as his handlers, covertly visiting him in Atlanta to do whatever it is that diabolical mind control handlers do. It makes perfect sense that Thornley may have contacted Mae in this regard, as during this period he was firing off letters left and right to whoever would listen to his JFK Assassination revelations, and his suspicions that he’d been MK-ULRTA’ed.

Case in point: A 1975 “affidavit” in which Kerry talked about a “team” of handlers he met in Atlanta, one of whom “bore an uncanny intellectual and psychological resemblance to an anarchist writer friend of mine [RAW] who lives in California…”

In RAW’s intro to The Prankster and the Conspiracy, he wrote:

I remember my last phone conversation with Kerry, during which he announced that just a week earlier I had come to Atlanta, argued with him about my alleged CIA connections, spiked his drink with LSD, and brainwashed him again. I told him that I had not left San Francisco in months, and that if he had a bad acid trip the previous week then somebody else gave him the acid, not me. I insisted on this as persuasively as I could.

Finally, Kerry relented—a bit. “Well, maybe you believe that”, he said. “But that means your bosses have been fucking with your head and implanting false memories in you too!”

“How do you argue that you haven’t had your head altered? “Look,” I said, I’ll put my wife Arlen on. She’ll tell you I haven’t left here in months.”

“That won’t prove anything,” he said with the calm certitude of a Gran Master announcing checkmate. “They probably fixed her head too.”

I don’t remember the rest of the conversation. I felt lost in an Escher painting…

A 1976 letter from Kerry (to Greg Hill) claimed that both Leary and RAW visited him that year, and he went on to write that, “I am literally surrounded by the intelligence community, but after the first three attempts to murder me things seem to have cooled down and most of the spies now appear to be on my side…”

During this period, RAW and Leary wrote on article (June 1976 issue of Oui) entitled “Brainwashing: How To Fold, Spindle and Mutilate the Human Mind in Five Easy Steps” which may have further fueled the fire in the minds of some that RAW and Leary were taking names and washing brains!

Download “Brainwashing: How To Fold, Spindle and Mutilate the Human Mind in Five Easy Steps” here.

Over on our The Early Discordians facebook group page, Johnny Walsh posted a sighting of the Principia Discordia in The New York Times Magazine crossword puzzle:

We share with you a long forgotten Discordian classic that appeared in, of all places, William F. Buckley’s National Review, titled “Our People’s Underworld Movement” and written by famed Early Discordian Harold Randomfactor (aka Tim Wheeler).

“Tim wrote an article for National Review which Bill Buckley loved. He published the article and made it the cover story. It was all about conspiracy theories and all sorts of stuff he had picked up from these guys, so that makes me think that article came after our association with them [the Discordian Society]. But that article certainly would have cemented the friendships. Remember we were on totally opposite sides of the political fence… Well, maybe not too opposite. Everyone seemed to be a libertarian/anarchist at the time…

“In those early years when Tim worked in the office [of the National Review], as an editorial assistant, there was a lot of joking about the Illuminati. I can remember conversations with fellow conservatives where the conspiracy of the Illuminati ballooned into a conspiracy of left-handed people, or those with first cousins named Jeffrey. It spawned fantastic letterheads! Nobody at NR took it seriously, and we made fun of those that did. I think that is why it was so much fun to discover the Discordians, who also didn’t take any of that seriously. We had discovered like-minded people who tended to be liberals, or at least anarchists. And we were right-wing crazies, although Tim was very much a libertarian…”

The Secret History of Immanentizing the Eschaton: The Mary Wheeler Interview.