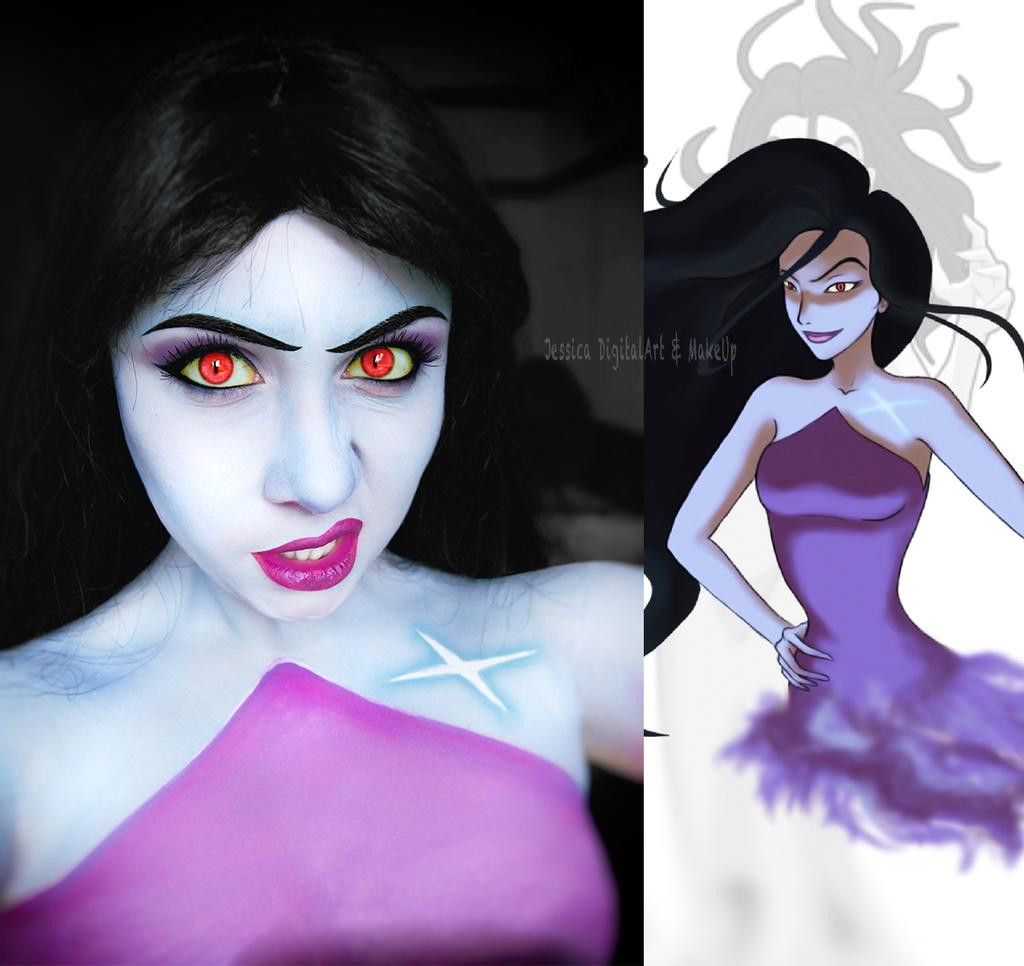 Found on deviantart: Instant Cosplay Eris from Sinbad by JessieOctober.

The above photo of Robert Anton Wilson, on the fabled Grassy Knoll, popped up on the Twitter a while back courtesy of Mustafa_al_Laylah, taken during a visit to Dallas circa 1998. In said photo, RAW is situated behind the picket fence separating the Grassy Knoll from the adjacent rail-yard bordering Dealey Plaza.

According to one assassination conspiracy theory (examined in the BBC series The Men Who Killed Kennedy), it was from this vantage point that the so-called Badge Man presumably fired the baleful bullet(s) that catapulted President Kennedy’s cranium into the great beyond, a theory based in part on photographic enhancement of the picket fence area at the time the fatal projectile(s) met their mark. Of course, the enhancement and enlargement of an old grainy photo (in this case the Mary Moorman photo) is like peering into a Rorschach Blot, and the longer you do so, the more figures your imagination brings to life, and thus fills in the blanks depending on what you expect to see, or desire to see, a la ‘Who Is The Master That Makes The Grassy Knoll Green?’. 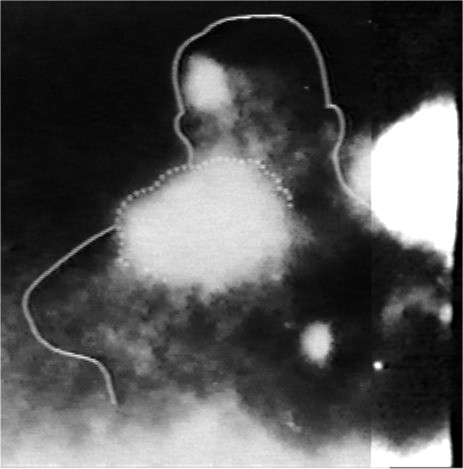 The manner in which RAW got sucked into this reality tunnel oh so long ago was due to Kerry Thornley’s unfortunate association with Lee Harvey Oswald, which in a roundabout way brought Thornley to the attention of New Orleans District Attorney, Jim Garrison, which you can read about here for more background.

During this tumultuous period, Garrison was viewed as a new darling of the “Radical Left,” presenting himself as a maverick prosecutor taking on corrupt authority in the form of the CIA and the military industrial complex, whom Garrison suggested (at one time or another) were part of the sinister plot that engineered Kennedy’s awful offing.

Due to this view of Garrison as some new hero of the Left, Thornley now found himself in a somewhat peculiar position, as he had long been involved with the burgeoning counterculture, having written for any number of underground magazines and newsletters, but now it appeared he was the odd man out. As RAW recalled in my book The Prankster and the Conspiracy:

Among those (in Thornley’s opinion) that had jumped aboard the Garrison bandwagon, was L.A. Free Press publisher/editor Art Kunkin, who, among other pro-Garrison articles, ran the following:

In response, Thornley sent the following letter to Art Kunkin, presenting his side of the story and requesting equal time: 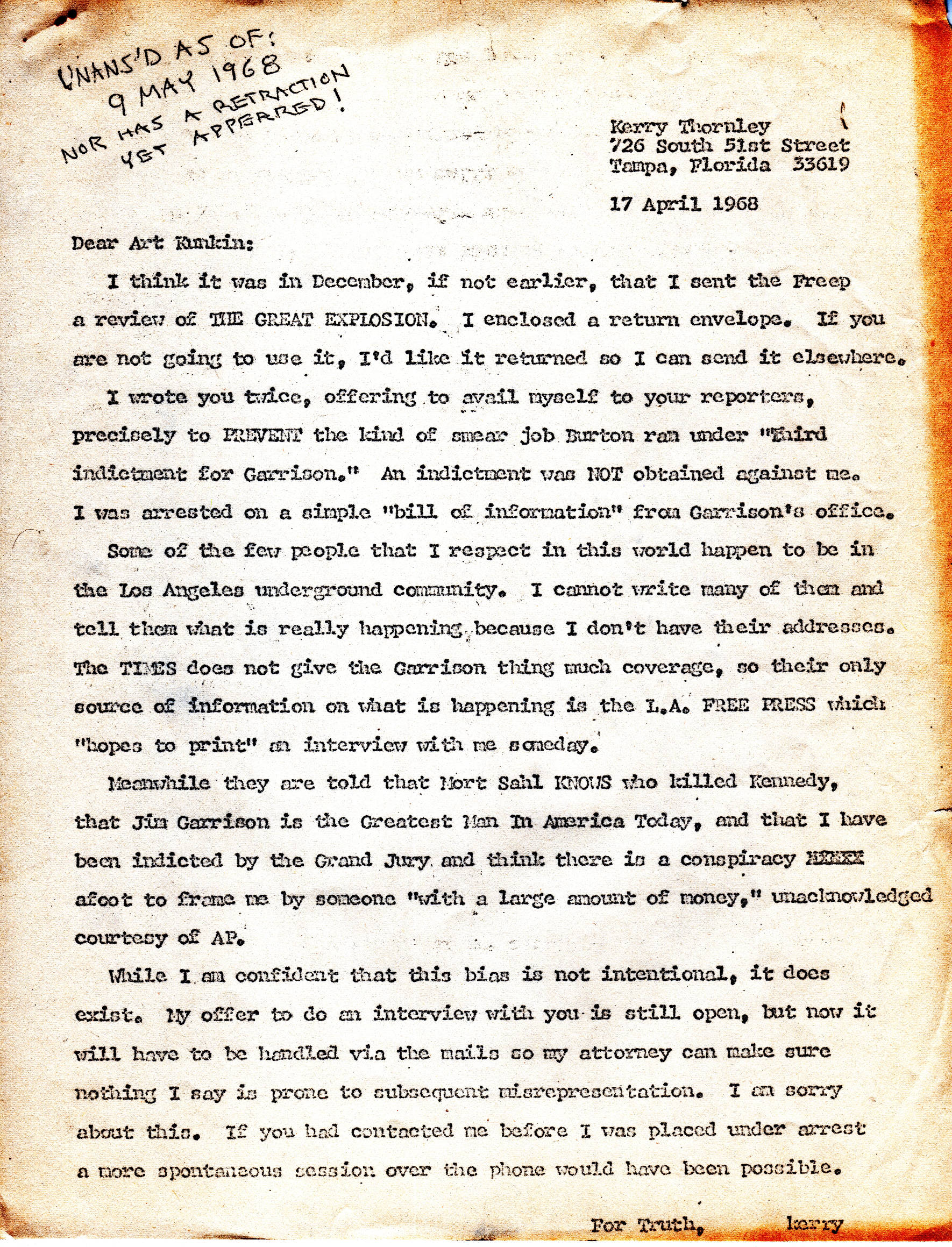 In their efforts to provide counter-programming, Thornley, RAW, and their fellow Discordians launched what became known as Operation Mindfuck, a concerted effort to bombard Garrison and his enthusiasts with a steady diet of zany disinformation under the banner of the Bavarian Illuminati. To further illuminate (or confuse) Art Kunkin, RAW sent the letter below, under the auspices of the Order of the Peacock Angel, signed by his Discordian alter ego, Mordecai Malignatus. 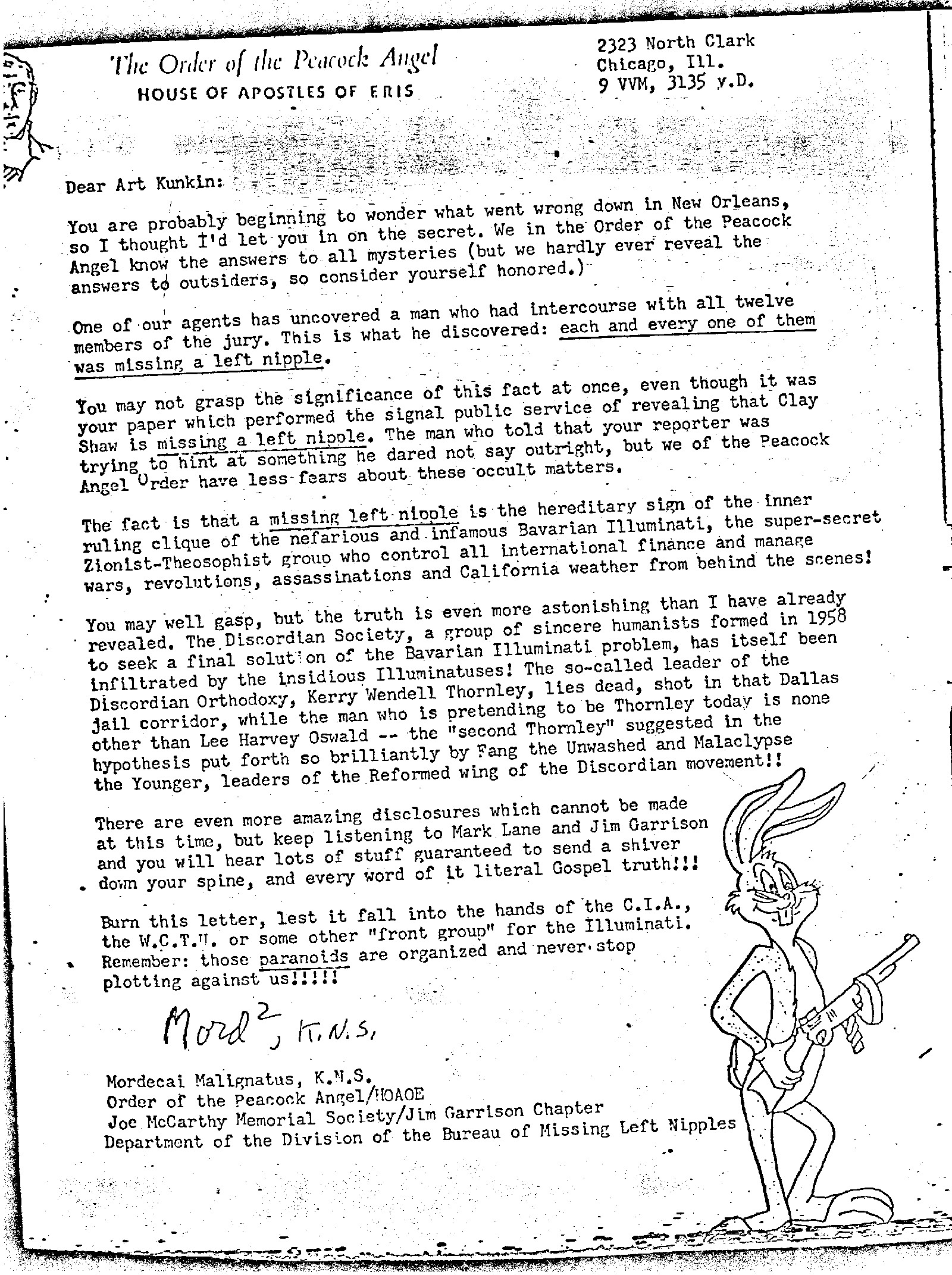 In order to further expand their network of potential Illuminati collaborators, RAW sent the following missive to a select group of underground movers and shakers. 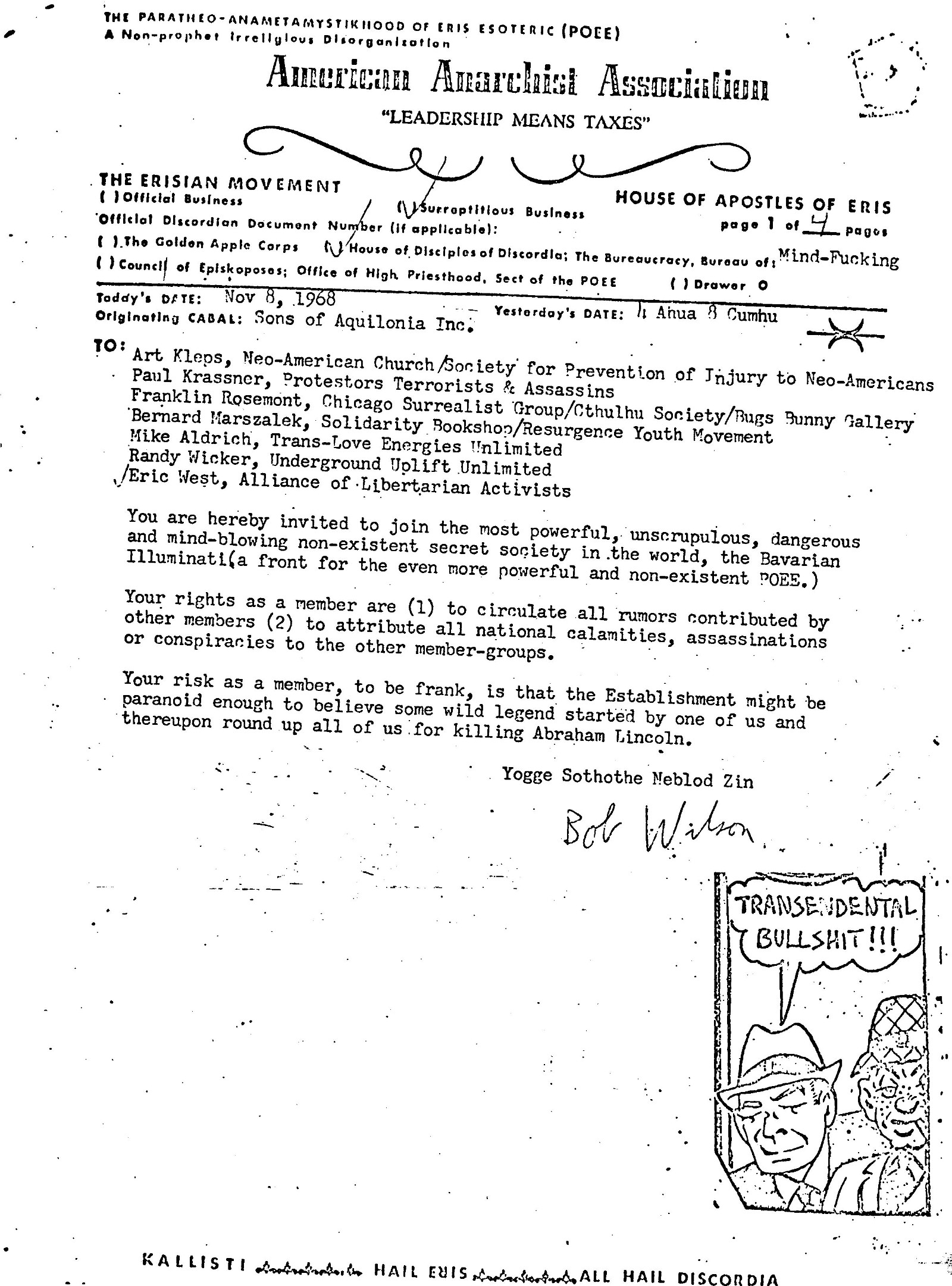 How the Discordian Society became synonymous with the Bavarian Illuminati can be attributed, to a certain extent, to a John Birch Society member named Allan Chapman, who also doubled as a JFK assassination researcher and “Grassy Knoll Irregular,” as they were dubbed; a legion of amateur sleuths who shared their investigative “fruits” with Jim Garrison, which then Garrison regurgitated to greater glory. RAW name-dropped Chapman in his infamous letter & answer in the April 1969 PLAYBOY Advisor.

“Wilson and I founded the Anarchist Bavarian Illuminati to give Jim Garrison a hard time, one of whose supporters believed that the Illuminati owned all the major TV networks, the Conspiring Bavarian Seers (CBS), the Ancient Bavarian Conspiracy (ABC) and the Nefarious Bavarian Conspirators (NBC).” (The Dreadlock Recollections, Kerry Thornley)

Chapman subscribed to the theory that the Illuminati (who he claimed controlled the Big Three TV networks) masterminded the assassination, and that one of the alleged assassins hid inside a storm drain in the picket fence area of the Grassy Knoll and then popped out of a manhole cover like some diabolical jack-in-the-box and peppered poor JFK with a barrage of bullets before returning to his underground lair there.

It should then come as no surprise that The Grassy Knoll played a part in the Illuminatus! Trilogy, embodied in the character of the Dealey Lama, a robed and bearded holy mad man who lived in the sewers below Dealey Plaza. In retrospect, the Dealey Lama sounds a lot like Kerry Thornley by the mid-1970s, when Kerry lived the life of a homeless holy man of sorts, sporting long hair and a biblical beard, and at one time or another actually lived in a storm drain for a spell.