“No Muse-poet grows conscious of the Muse except by experience of a woman in whom the Goddess is to some degree resident; just as no Apollonian poet can perform his proper function unless he lives under a monarchy or a quasi-monarchy. A Muse-poet falls in love, absolutely, and his true love is for him the embodiment of the Muse…

But the real, perpetually obsessed Muse-poet distinguishes between the Goddess as manifest in the supreme power, glory, wisdom, and love of woman, and the individual woman whom the Goddess may make her instrument…

The Goddess abides; and perhaps he will again have knowledge of her through his experience of another woman…”
—Robert Graves, The White Goddess

Robert Graves—in the above passage—was obviously referring to Eris, although he tried to sugar coat the whole thing to make it appear as if our Lady of Perpetual Chaos is all sweetness and light, which is totally missing the point. Or as Eris herself once said in a certain SoCal bowling alley:

I have come to tell you that you are free. Many ages ago, my consciousness left man, that he might develop himself. I return to find this development approaching completion, but hindered by fear and by misunderstanding. You have built for yourselves psychic suits of armor, and clad in them, your vision is restricted, your movements are clumsy and painful, your skin is bruised, and your spirit is broiled in the sun. I am chaos. I am the substance from which your artists and scientists build rhythms. I am the spirit with which your children and clowns laugh in happy anarchy. I am chaos. I am alive, and I tell you that you are free.

In The Big Lebowski, the Coen Brothers use the holy bowling alley metaphor to further expound upon the Erisian mythos, featuring Jeff Bridges in his classic role of The Dude, the embodiment of Southern California-cool-Eristic-forces-in-action. The last line he delivers in the film is: “The Dude abides,” which certainly seems a wink and nod to a certain Goddess who also abides—or as a way of saying that the Goddess abides in The Dude.

An erstwhile political activist—fond of White Russians, smoking dope and bowling (but not The Eagles)—The Dude goes with the Erisian flow, unconcerned about paying his rent and, in fact, it appears he has no visible means of support and relies entirely upon the will of Eris to guide his chaotic movements and settle his bills. Here the Dude expounds upon The Eagles:

At the eighteen minute mark in the film we see The Dude’s bowling lane identified as the holy Discordian number 23.

The Erisian forces are then set in motion when a guy named Smokey from the opposing bowling team steps over the line during a league match, which sends Walter (John Goodman) on a tirade; Walter brandishes his gun, aims it at Smokey and screams: “Has the whole world gone crazy?” Some may see Walter as an out of control gun wielding wacko, but in reality he’s channeling the chaotic Erisian forces in an attempt to bring some semblance of real order and sanity to a world gone mad with lane violations. 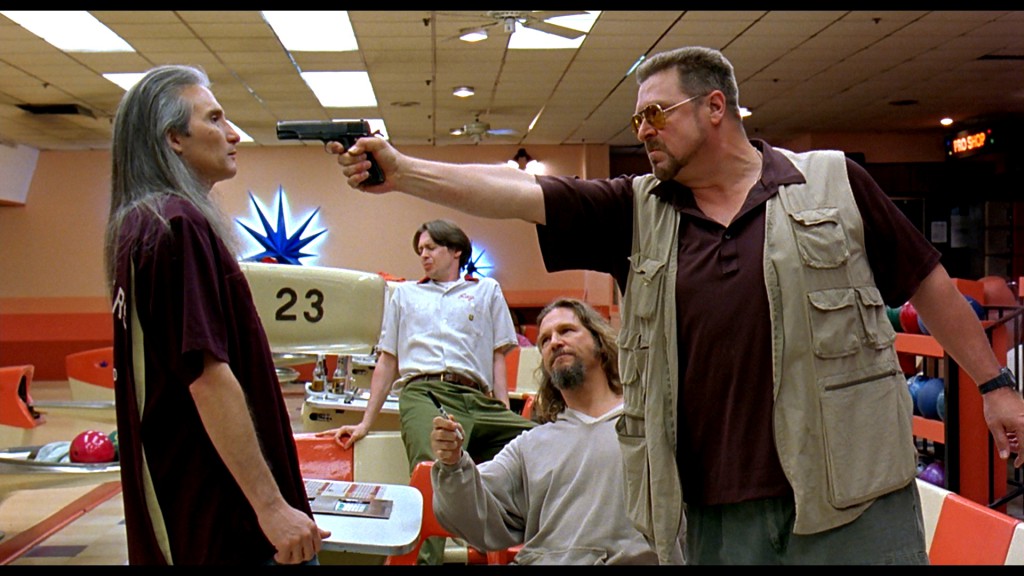 With all his ups and downs, The Dude always seems to land on his feet (more often than not in slippers… or bowling shoes) which attests to the fact that if you put your trust in Eris (In Goddess We Trust!) then some spectacular shit is bound to happen along the way—or at least you won’t be bored!

Conversely—on the other side of the yin-yang coin (or the Hodge-Podge, have you)—there’s that big meanie Jeffrey Lebowski; a man—due to his fucked-up control freak nature—who is crippled, both literally and karmically; a constricted and conniving sour-pus possessed by The Curse of Greyface.

Thus you have the two competing Lebowski’s, a veritable yin-yang/hodge-podge of counter push pull contrasting styles. First, Jeffrey Lebowski (The Big Lebowski played by David Huddleston) who has employed his wealth and power in an attempt to control others; whereas The Dude, well, you know how he rolls. Or as Sam Elliot (as “The Stranger”) says: “Dude, I like your style” …or something to that effect.

The grey-faced aneristic order the Big Lebowski conjures into existence is a group of nihilist Nazis ne’er-do-wells who attempt to rob The Dude of his Erisian powers. In the final showdown, the nihilists attempt to harness Eris and control chaos, but end up getting their asses handed to them when Walter invokes Goddess and launches a bowling ball (the symbolic Golden Apple) knocking the crap out of one of the nihilists along with chomping off the ear of another. Although a glorious Erisian victory, a casualty is unfortunately suffered during the melee when their buddy Donny (Steve Buscemi) dies of a heart attack. Here is Walter’s moving eulogy for Donny.

Goddess reveals herself in many others ways throughout the course of the film, one of which comes in the form of the Big Lebowski’s free spirited and fun loving wife, Bunny, who embodies the trickster spirit of that Great Discordian Saint, Bugs Bunny. 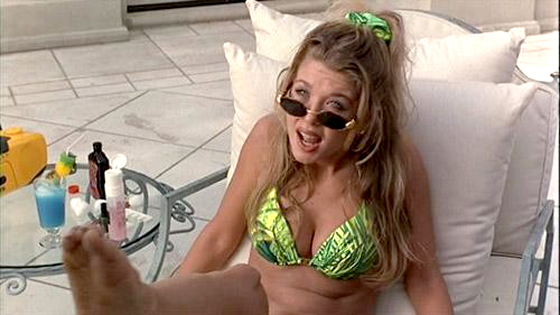 And of course the Goddess manifests in the Big Lebowski’s daughter—Maude (Julianne Moore)—who has rebelled against hers father’s control and chooses The Dude to impregnate her with a magickal child of Chaos; an intentional act to get that old Hodge-Podge-counter-push-pull moving in a positive direction, Eristic vs. Aneristic.

At the 20 minute mark, another deity in the Discordian pantheon appears, none other than his holiness Richard Milhous Nixon shown in full stride as he prepares to roll a Kallisti-inscribed bowling ball into the dark, savage heart of the American dream. Just one more among many apparent Discordian winks and nods imbedded in The Big Lebowski. 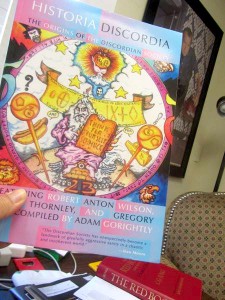 I must also mention another Nixon-related synchronicity that occurred not long ago when Andrew West Griffin of the Red Dirt Report tweeted a pic of Historia Discordia: The Origins of the Discordian Society with the very same Tricky Dick image in the background. And if that wasn’t enough, on Andrew’s table rested a copy of Jung’s Red Book—another stone-cold synchronicity which I probably shouldn’t need to explain.

When I asked if he’d intentionally placed the Nixon bowling photo in his Historia Discordia pic—or Jung’s Red Book, for that matter—Andrew replied it’d happened by pure dumb luck, which once again confirms the spirit of Eris busy at work directing human affairs and simultaneously blowing our brains.

If all of this wasn’t enough, I just recently discovered a religion dedicated exclusively to The Dude called The Church of the Latter-Day Dude.

In this regard, it should also be noted there are now more Dudeist Priests in Ireland than Catholic ones. Hail Eris! 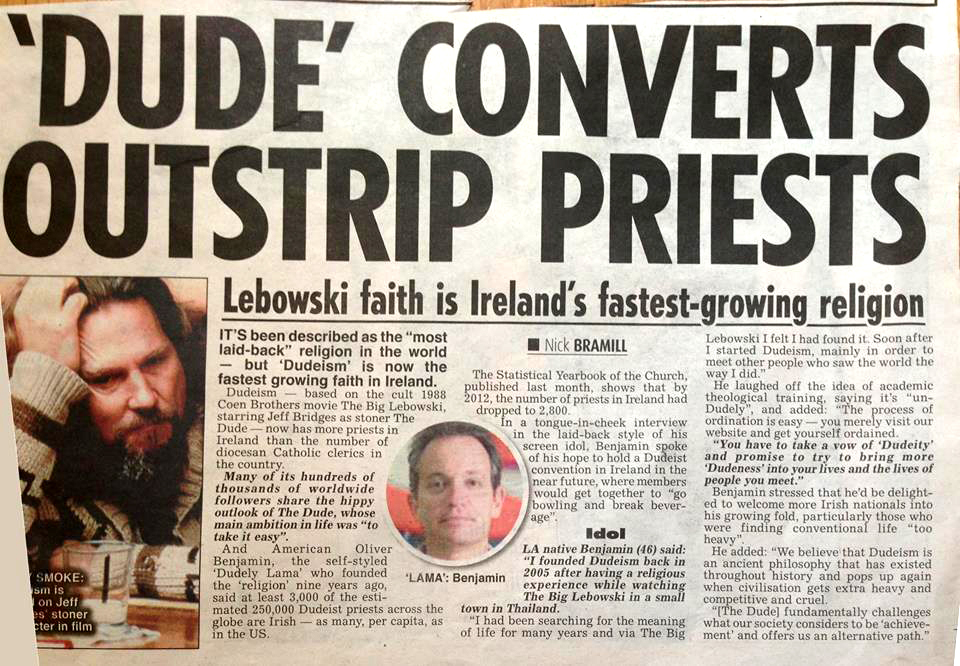 Included in the Dudeism iconography is a yin-yang like symbol, which seems also a twist on The Sacred Chao but instead of the Golden Apple yin-yanging the Pentagon you have the bowling ball symbol with finger holes balanced against one another in the cosmic drama of life. 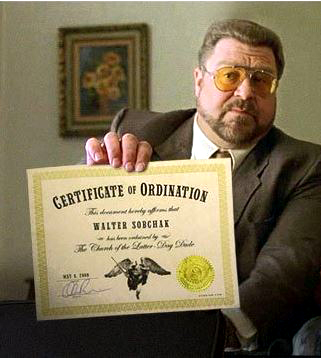 And just like Mal-2 back in the day, The Church of the Latter-Day Dudes likewise issues their own certificates of ordination if you so desire to become a Dudeist Priest.