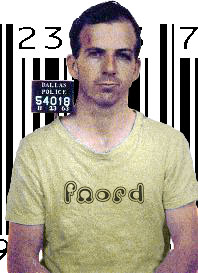 Nov 22nd, also known as “JFK Assassination Day,” is a high holy day in Discordianism—or if it’s not, it should be.

Discordianism—for those not in the know—is a religion that worships Eris, the Greek Goddess of Chaos and Discord, that was created (or revealed) to a couple of lads named Greg Hill and Kerry Thornley in a Southern California bowling alley in 1958. Afterwards, the official organization (or dis-organization) of the religion was dubbed The Discordian Society.

Numerous hints as to the mystical significance of bowling alleys and their relation to Discordianism can be found in the movie The Big Lebowski, such as the Dude’s preference for Lane 23. 23—it should be noted—is one of the holiest of numbers in Discordianism, second only to the number 5. If you’re interested in finding out more about the Law of Fives and other such holy wonders you’re encouraged to read The Principia Discordia, the Bible of the Discordian religion (or irreligion, as the case may be) which, in turn, became a major influence on the underground classic Illuminatus! So much so, that the authors of Illuminatus!—Robert Anton Wilson and Robert Shea—dedicated the first book in the trilogy to none other than Discordian founders, Hill and Thornley. But we’re getting ahead of ourselves….

Back in 1959, Kerry Thornley served in the Marines with none other than Lee Harvey Oswald, and was actually writing a novel based on Oswald three years before JFK’s Assassination. Thornley considered Oswald a bright and interesting fellow, although somewhat of a natural born screw off who could fuck up a wet dream. With that being said, Thornley was a bit of a loose cannon himself, constantly bouncing from one political stance to the next; one minute a card-carrying commie, the next moment an Ayn Rand Libertarian, then later transforming into an acid gobbling anarchist. Somewhere along the line, Thornley grew to detest JFK, mainly because of a United Nations supported massacre that took place in the Katanga region of the Congo that was endorsed by the Kennedy administration. So when Thornley—ever the irreverent one—got wind of Kennedy’s assassination on Nov. 22, 1963, he joked openly about the Pres’s death to co-workers at a restaurant where he waited tables, then later that evening he and a friend wound up at the bar where they made tongue-in-cheek toasts to the Marine Corps drill instructor who taught Oswald how to fire his rifle, offending most everyone in earshot. A couple of days later when his old friend Oswald got pumped full of lead to the point of being dead, all of Thornley’s laughter died in sorrow… But the story doesn’t end there.

During the period Thornley and his friend Greg Hill lived together in New Orleans in 1961, some of their early Discordian writings—that later made their way into the 1st ed. of the Principia Discordia (published in 1965) —were covertly copied, after hours, on New Orleans’ District Attorney Jim Garrison’s mimeograph machine by Hill’s friend, Lane Caplinger, a secretary in the office.

Oddly enough, when Garrison launched his JFK assassination investigation in 1967, Kerry Thornley became a key suspect in the case. To this end, Garrison claimed that Thornley was a deadly CIA agent who was part of a JFK assassination conspiracy, but Kerry claimed innocence and that he was being framed. It didn’t help his case that he had earlier joked about JFK’s death. Of course, Garrison had a lot of odd theories, including that Thornley was one of the notorious Oswald doubles and that the Discordian Society was a CIA front organization that had been involved in the assassination. Hail Eris!

For further details about this and much, much more related to Discordianism fnord visit www.historiadiscordia.com.

That was today in JFK Assassination History.

2 replies on “JFK Assassination Day and Discordianism by Adam Gorightly”