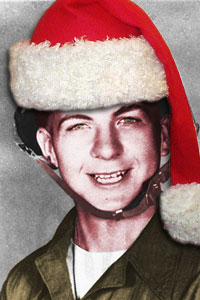 In 1962, Marine Corps Pvt. Kerry W. Thornley (and Discordian Society co-founder with Greg Hill) finished writing his first novel based on a friend and fellow Marine buddy, Lee Harvey Oswald, who strangely ended up defecting to the U.S.S.R. in the middle of the Cold War.

Little did Thornley know that his former friend, Oswald, who he used as a template for his main character Johnny Shellburn in his oh-so-hot-new-first novel, The Idle Warriors, would soon become the most-hated-man-in-America, unbelievably accused of assassinating President John F. Kennedy. As a founder of Discordianism, perhaps a young Kerry should have expected some turn-about-is-fnord-play from his sweetheart Eris, the Goddess of Discord, in this matter.

Through the book’s fictional Oswald-based character Johnny Shellburn, The Idle Warriors gives a rare and first-hand insight into the mind of the man who allegedly committed the most infamous crime of the 20th Century.

The Idle Warriors is Thornley’s fictional book written about Lee Harvey Oswald before the John F. Kennedy Assassination, making the work the only unique and pre-assassination artifact completely free of later events and their subsequent biases regarding Oswald and the JFK Assassination. Unfortunately, after the events on 11/22/63 in Dallas, Texas and the subsequent Warren Commission investigation which ended-up hauling Thornley into testify about his personal relationship with Oswald in the Marines and included interest of Thornley’s own pre-Assassination writings about America’s First Lone Nut Assassin, the original type-written manuscript was somehow lost by Kerry Thornley to his eternal dismay.

Believed by Thornley himself and others to be forever misplaced and forgotten, a copy of the The Idle Warriors‘ original manuscript was miraculously rediscovered and rescued from the National Archives in the early 1990s by an unlikely pair of fellows attending a Dairy Queen Christmas-time franchisee convention in Washington, DC, who happened to have a side-interest in JFK Assassination lore, research, and materials.

Thornley gave his a copy of The Idle Warriors manuscript to the Warren Commission as background information to Oswald’s life and motives, and it languished as an obscure evidence item in the National Archives. Originally submitted as exposition to his testimony, the manuscript by Thornley had mostly been forgotten. Over the years, Thornley came to misplace his only other copy of The Idle Warriors and came to believe he had lost all copies of the manuscript.

By some Discordian Xmas miracle, the Dairy Queen franchisee amateur researchers requested, and were oddly granted, special permission by the National Archives to deconstruct the Warren Commission’s copy of the manuscript page-by-page and allowed to photocopy Thornley’s type-written The Idle Warriors pages.

Eventually this photocopy was handed over to infamous conspiracy and innovator publisher Ron Bonds of IllumiNet Press who immediately published The Idle Warriors, in conjunction with Kerry Thornley with a new introduction by Best Evidence author David S. Lifton, in 1991 under the IllumiNet Press imprint, launching the Ron Bonds conspiracy publishing empire.

The only book about Oswald before the JFK Assassination was finally published. Hail Eris and Dairy Queen dip cones!

Here’s your Christmas miracle fnord excerpt from The Idle Warriors:

THE GIN FIZZ GLISTENED CHEERILY in the varicolored glow of the Enlisted Club’s Christmas decorations. Pat smiled and counted on his fingers, “September, October, November, December. If the next four months pass like this, we’ll be back here in Japan from maneuvers in no time!”
“But Pat,” said Henry Hamilton, “who wants to be in Japan tonight?”
“Me, I do. And I want to get drunk.”
“On JC’s birthday you want to get drunk?” Henry’s intentions were more serious than his flippant tone, but he knew how to communicate more effectively than most moralizers – lightly – painlessly.
“Yes, I wanna get stinkin’, stoned, bombed and blasted. Happy Birthday, JC, wherever you are!”
“If you learn to tolerate the people around you, then you wouldn’t find it necessary to act like them so often.”
“Act like who?”
“Bob Kidd. Johnny Shellburn.”
“Go to the devil, Hamilton.”
Henry smiled sadly, got up and went to the devil, or to the barracks, or some place, leaving Pat Hoolahan to drink alone.
“Happy Birthday, JC! Happy Birthday!”
Pat’s voice was loud and hoarse. “Happy Birthday to you. Happy Birthday to you. Happy birthday to you, Dear Jesus. Happy Birthday to you.”
There was laughter in the barracks.
“Merry Christmash!”
“Merry Christmash yourself, Christian.”
“Merry Christmash, Jack.”
“Merry Christmash, Mouse.”
“Guess what?”
“What?”
“It’s Christmash!”
They joined in the drunken laughter then, arm-in-arm, they weaved down to the other end of the barracks.
Pat bumped into the fire extinguisher. “Help me get the pin outta the fire distinguisher, Jack. I wanna distinguish a fire.”
“What? There’s no fire.”
“I know,” Pat hung his head in shame, “but I’m homesick for snow at Christmashtime. I wanna fill the barracks with snow. Help me get the pin outta the fire distinguisher.” Pat looked doleful as he begged, not attempting to take the pint out himself – a simple operation.