Skip to the content
Back in 2004, Brian Doherty of Reason Magazine reviewed The Prankster and the Conspiracy (Amazon Kindle, Paperback) and titled his review “Historia Discordia,” a title that, with Brian’s consent, I’ve decided to use for this website, as well as the forthcoming book Historia Discordia: The Origins of the Discordian Society coming soon from RVP Publishers. 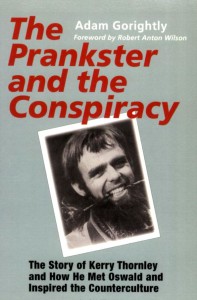 Kerry Thornley lived and died in obscurity. But while few people noticed, he invented one of the 20th century’s more influential religions, helped launch ’60s-style sex-and-nature neopaganism, and was a major force behind the first modern libertarian ‘zine.

He was also, to hear him tell it, part of the conspiracy to murder JFK, and thus escalate the Vietnam War — a conspiracy so secret even Thornley didn’t know about it at the time.

Thornley was one of America’s most fascinating unknowns. It is fitting, given the underground nature of his claims to fame, that his first biography, The Prankster and the Conspiracy: The Story of Kerry Thornley and How He Met Oswald and Inspired the Counterculture (Amazon Kindle, Paperback), by Adam Gorightly, is published in the quasi-clandestine form of a print-on-demand book from Paraview Press.

Thornley helped his high school buddy Greg Hill invent the comedic religion of Discordianism in dull suburban Southern California in the late 1950s. It was dedicated to the worship of Eris, the Greek goddess of Chaos. Its flavor can be gleaned from this bit of powerful magick, the Turkey Curse, from its holy book, the Principia Discordia: “Face…towards the direction of the negative aneristic vibration that you wish to neutralize. Begin waving your arms in any elaborate manner and make motions with your hands as though you were Mandrake feeling up a sexy giantess. Chant, loudly and clearly: GOBBLE, GOBBLE, GOBBLE, GOBBLE, GOBBLE! The results will be instantly apparent.”

Thornley joined the Marines in 1959, where one of his buddies at the El Toro Marine Base was Lee Harvey Oswald, an openly communist “outfit eight ball” known to his fellow grunts as “Oswaldskovitch.”

Thornley began writing a novel based on his disillusioning experience in the Marines. After hearing that ol’ Oswaldskovitch really meant it with that commie stuff when he defected to the Soviet Union, Thornley transformed the book, called The Idle Warriors, into a roman à clef about Oswald — making Thornley the only person to write a book about Lee Oswald before that fall day in Dallas.

Thornley was living in New Orleans when John F. Kennedy was killed, hanging out, according to his own recollections (which some friends suspect Thornley invented) with a curious cast of characters. Among them were some unfortunates caught in New Orleans District Attorney Jim Garrison’s feckless investigation into the JFK assassination.

What is definitely not Thornley’s imagination, though, is that he was dragged into the “Who Killed Kennedy?” melodrama, testifying before the Warren Commission and targeted by Garrison, who thought Thornley might have been part of the conspiracy as a “second Oswald.” The two men allegedly looked quite similar, and there was a weird series of coincidences linking them.

In the mid-’60s Thornley headed back west and became a major writer for the first modern libertarian ‘zine, The Innovator. In those years he also became an advocate of the early SoCal free love cult Kerista, which neopagan historian Margot Adler credits, says Gorightly, as “the true beginnings of the neopagan movement in contemporary culture.”

Through the ’70s and the ’80s the “order” reflected in his insanely elaborated conspiracy theories won Thornley’s heart away from the chaos of Eris, and also lost him most of his old friends. No one wants to hang with someone who is sure you are part of a baroque conspiracy against him. Thornley had decided that Garrison was right after all, that he was a CIA mind-control slave, that a mysterious pal in New Orleans was E. Howard Hunt, and finally that he had been a Manchurian candidate from birth, with his parents Nazi spies.

He spent the last years of his life (he died in 1998) occasionally washing dishes and living in storm drains, and hanging out as a local eccentric in Atlanta’s Little Five Points neighborhood. A sad fate for someone dedicated to spreading forces of upheaval and chaos: from his Discordianism to his advocating a libertarian diaspora populating stateless floating cities in The Innovator, to his inspiration of Robert Anton Wilson and Robert Shea’s classic trilogy, Illuminatus!, to all the aftershocks spreading from that earthquake of a novel.

But Thornley still got in his prankish fun, for example putting up flyers urging people to “Boycott the illegal weapons amnesty program: Don’t bring your illegal weapons to the Super Bowl in exchange for tickets!” when the game was held in Atlanta in 1994.

A strange and troublesome man, that Thornley, serving Eris to the end, and proof that, while you don’t have to be crazy to warp American culture, it helps.