Skip to the content
Sometimes people send me things here at the Discordian Archives… and sometimes I get around to writing about them. Hence the title “semi-recent” as it’s been several months since I received the items in question—two different versions of Principia Discordia (PD)—one being a Russian translation sent by a chaotic comrade in Russia named Ivan who produced a run of 24 copies. (Why not 23, Ivan?)

The funny thing is, after Ivan stuck this Russian PD in the mail it took forever (like several months, as I recall) to finally land in my mailbox. When I say “funny,” I mean not so much funny “ha-ha” but more funny “strange” in that the envelope in which the Russkie PD was delivered appeared to have been opened along the way by postal inspectors, who no doubt wondered: “What the fuck’s this guy getting from Russia?” and became even more confused (Hail Eris!) when they examined the contents.

The other PD edition I recently received came courtesy of a fellow named Christopher who some time back checked out my youtube video concerning the different editions of PD.
Afterwards, Christopher contacted me via email inquiring as to why I’d neglected to mention the red hardcover version published by Revisionist Press in New York in 1976.

Christopher—as it turned out—owned two copies of the Revisionist Press PD and offered to send me a copy for inclusion in the Discordian Archives—an offer I couldn’t pass up! To return the favor, I sent Christopher a signed copy of Historia Discordia: The Origins of the Discordian Society. (Get your own copy now while supplies last!)

In 2006, Dr. Jon Swabey posted to livejournal.com that he had just purchased a copy of the Revisionist Press edition from Run For Cover in New York, which during this period had bought up the inventory of the now defunct Revisionist Press who—according to rumor—had been a CIA front.

Not sure how all this CIA business got started, but Mark Philip Steele (creator of the Illuminatus! comix) mentioned to me once that he’d purchased a copy of the Revisionist Press PD in NYC in ’76 and that there was a sign next to the book saying it was produced by the CIA, which of course seems like an obvious joke—but who knows, there might indeed by some truth to the rumor that the Discordian Society was a CIA Front!

I’d always assumed Greg Hill was not involved with Revisionist Press edition, although I’m beginning to suspect that he may have played some role in its production. In 1973, Greg relocated to NYC and was there from 1973-1975 and during this period could’ve hooked up with Revisionist Press and swung a deal to have the PD hardcover version published.

According to the Principia Discordia Wikipedia page:


Wikipedia is correct in stating that the Revisionist Press edition is a reproduction of the 4th edition, which is the most well known version of PD, first published by Rip Off Press in 1970 and later reproduced by Loompanics Unlimited. However, the bit about adding the “bridge” stamp is partly true and partly false. This is where it gets a bit confusing, so try to follow along… Below is page 00075 from the Rip Off Press edition, and as you’ll see there was actually a stamp added to this earlier version, which pre-dated the Revisionist Press edition. I’ve seen about a half dozen copies of the Rip Off Press 4th edition and all of them had a fresh stamp applied by Greg Hill: “This work is a bridge so move on thru.” A minor and totally obscure detail, I admit, but the deeper one digs into the PD history, the more confusing it all becomes.

The confusion with the “bridge” stamp stems from subsequent Loompanics editions. The first Loompanics PD (with a white cover) was published in September 1978 and “This work is a bridge so move on thru” is handwritten in the same spot where the hand stamp had previously been applied, page 00075. The next page is an addition (to the 4th edition) discussing lopsided pineal glands. Handwritten on this new page is “POEE is a bridge from Pisces to Aquarius.”

As a verbal pun sidenote by way of a late-80s Discordian lecture Kerry Thornley gave to a small roomful of folks at Atlanta’s Oxford Two used bookstore, Thornley revealed that POEE is pronounced \ˈpü-ē\ (poo +‎ -y) or, if you can get it, poo-whee! Who knewy?

As a follow-up to the 1978 white covered Loompanics edition, a yellow covered edition was produced in 1980 and on page 00075 “This work is a bridge so move on thru” is not included. So, in essence, the stamp was not added to the previous Revisionist edition—it was already part of the Rip Off Press 4th edition that was reproduced in the Revisionist Press edition.

According to information gleaned from the Discordian Archives, Greg Hill supplied the original paste-ups to publisher Michael Hoy during the layout for the 1980 Loompanics edition. These original paste-ups did not include the “bridge” stamp. As previously noted, the stamp was later added to the final printed copies of the Rip Off Press edition00001 after they rolled off the presses. 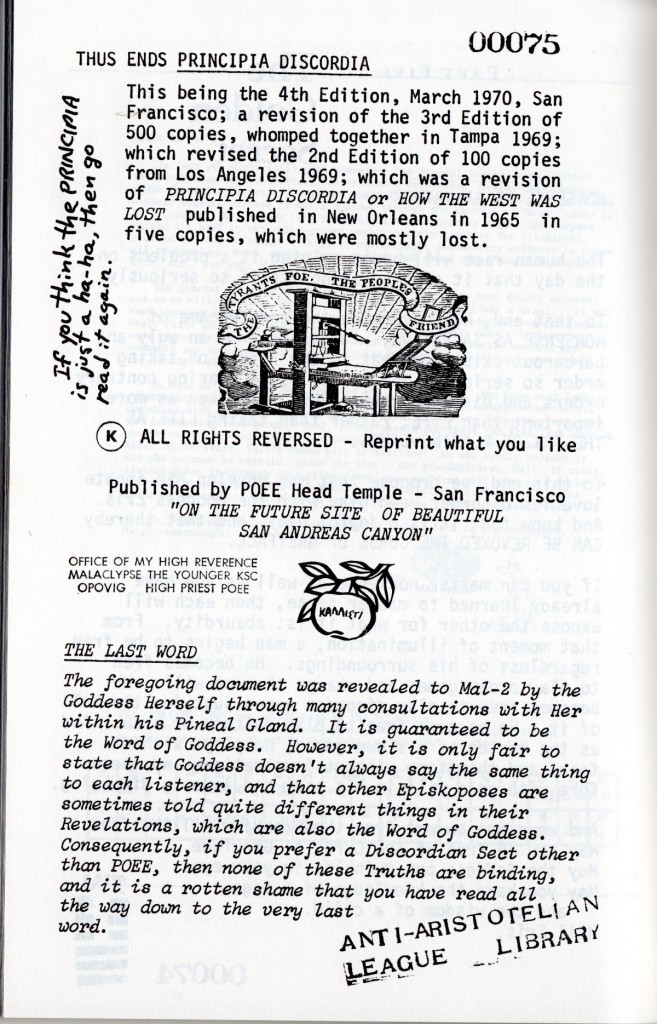 And the rest is PD history.

00001In recent email correspondence, Fred Todd of Rip Off Press informed me (to the best of his recollection) that Rip Off didn’t actually publish the 4th edition, but merely printed it. It can be assumed that the printed copies were picked up by Hill and before distribution he stamped “This is a bridge so move on thru” on page 00075. The copies I’ve seen of the 4th edition, taken from Hill’s own personal stash, also had the two page 5th edition insert added, as well as a Pope Card.

I believe this is the piece that ties the CIA thing together; it’s believed to be from the Run For Cover page, but the original source seems lost. (I asked Swabey and he suspects the same I believe.)

“Who are Gordon Press and Revisionist Press?
Over the past 30 years the Gordon Press (and its Revisionist Press imprint) developed a mystique. Their outlandish prices and erratic order fulfilment led some to believe that their esoteric list of titles was not intended for purchase at all, but was merely a device to gather the names of political subversives on behalf of the CIA!

Suffice to say there is no truth in this rumor, a mixture of a little knowledge and a lot of paranoia. “I wish it had been true about the CIA,” says editor Herb Roseman today. “We might have made some money!”

In reality, the Gordon Press of Brooklyn, New York was a small family business with an eccentric owner. When it closed in 2001, Run For Cover! was delighted to take over the remaining inventory, full of interesting, provocative and indeed eccentric titles, few of which were printed in quantities greater than 200, and many of which are available nowhere else.

So now, for a limited time, you have the chance to own a piece of the mystique at a fraction of the original prices — we won’t tell the CIA if you don’t!”

My 4th edition lacks the stamp. Maybe some copies left the printer without going to Greg Hill, or Greg Hill didn’t get the idea of stamping them until after parting with some, or missed stamping some.

Jesse, yes, the lack of a stamp might suggests RAW’s involvement because he received one of the stampless copies….that he knew Revisionist Press folks also adds some weight to the theory…Greg Hill, I assume, would have been cool with the reprint because the book was kopyleft.

Hi! I’m a discordian from Brazil!

i am from Italy hello. Can you help me translate? /rardor