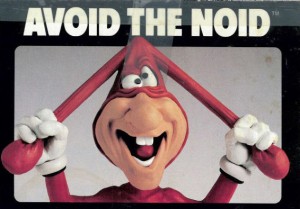 Pissed off that Domino’s Pizza ads featuring a manic little character named the Noid were trying to make fun of him, 22-year-old Kenneth Lamar Noid—equipped with a .357 Magnum—walked into a Domino’s in Chamblee, Georgia on January 30, 1989, ordered a combination pizza, then took the two employees working there hostage.

When police negotiators showed up with bull horns and that whole bit, Noid demanded $100,000 in cash, a getaway car (other reports claim he demanded a helicopter), and a copy of Robert Anton Wilson’s The Widow’s Son as ransom.

After a five-hour standoff (according to the Law of Fives), the two employees escaped and Noid surrendered to the cops. All he got out of the deal was a pizza and a large Pepsi.

Following this incident, Domino’s discontinued using the Noid as their mascot, which had been a weird, though highly successful campaign, don’t ask me why.

Noid (Kenneth Lamar, this is) was charged with kidnapping, aggravated assault, extortion, possession of a firearm and failure to pay for his pizza.

Found not guilty by reason of insanity, Noid was subsequently shipped off to a mental institution for a three month stay. He tragically committed suicide in 1995.

This has been today in Discordian History.

He should have demanded books 4 and 5 of The Historical Illuminati Chronicles.