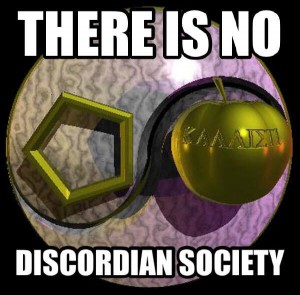 Inspired by last year’s production of Daisy Campbell’s Cosmic Trigger Play and Find the Others Festival, an intrepid group of Discordians across the pond are crowdsourcing a Disco free-for-all called Festival 23 slated for the weekend of July 23rd, 2016 that is described as “An interactive celebration of literature and the arts; of theatre, playshops and music inspired by the Discordian movement; a society of philosophers, theologians, magicians, scientists, artists, clowns and similar maniacs who are intrigued with Eris, Goddess of Confusion, and with her doings.”

One of the organizers of the Festival 23 event recently appeared on the Cult of Nick which you can hear here.

Word on the street is that Daisy Campbell and her band of merry misfits will also be involved with Festival 23, all of which will presumably keep the Golden Apple rolling in a positive direction all the way to Santa Cruz, California where Daisy and the troops intend to stage the Cosmic Trigger play in 2017—on July 23rd to be exact—the same date of the annual Robert Anton Wilson Day in Santa Cruz as well as the day when RAW originally pulled the cosmic trigger back in 1973, which is what all this fuss is about.

For more of a tease, read Daisy’s update here.

To coincide with all these Cosmic Trigger related happenings, the RAW estate has just announced the official launch of its publishing arm Hilartius Press and re-release of a whole slew of RAW titles. First out of the chutes will be—you guessed it!—Cosmic Trigger I: The Final Secret of the Illuminati with a brand spanking new intro by John Higgs author of the fabulous Discordian title KLF: Chaos Magic Music Money that if you haven’t read, you really should, and quickly.

And if all of that wasn’t enough jolly good news to keep all you greyfaces out there from totally immanentizing the eschaton, Tom Jackson over at rawillumination.net just the other day reported that the fabled Brunswick Shrine has apparently been rescued from the wrecking ball!